In this UltraMixer review, you’ll either find a Bitcoin mixer you love or find a mixer that you’d never again look at. Either way, this piece will help you out.

To get you a clear picture, we’ll be discussing every single feature that the mixer is made up of. It includes fee, anonymity, minimum requirements, time-delays and everything else.

You can also skip to the final verdict if you’d like to save time, however, I recommend you go through the fine-print.

It’s a Bitcoin mixer. It lets you send Bitcoins, and in return gives you new coins, completely unrelated to your previous deposit.

It primarily is useful in breaking the link between your initial Bitcoin acquisition and the final destination wherever you spend these new coins you get from UltraMixer.

Here’s a brief overview of the mixer’s primary features:

Let’s get started then?

I like anonymity, don’t you? If I’m asked to register anywhere, with any detail whatsoever, I feel my privacy is at risk.

Fortunately, that’s not the case with UltraMixer. It doesn’t require any registration whatsoever. You can use UltraMixer without registering, at all!

Why do I talk of the UI at the beginning of this UltraMixer review?

If the UI is hard, the features won’t make sense because no one will be able to use them. 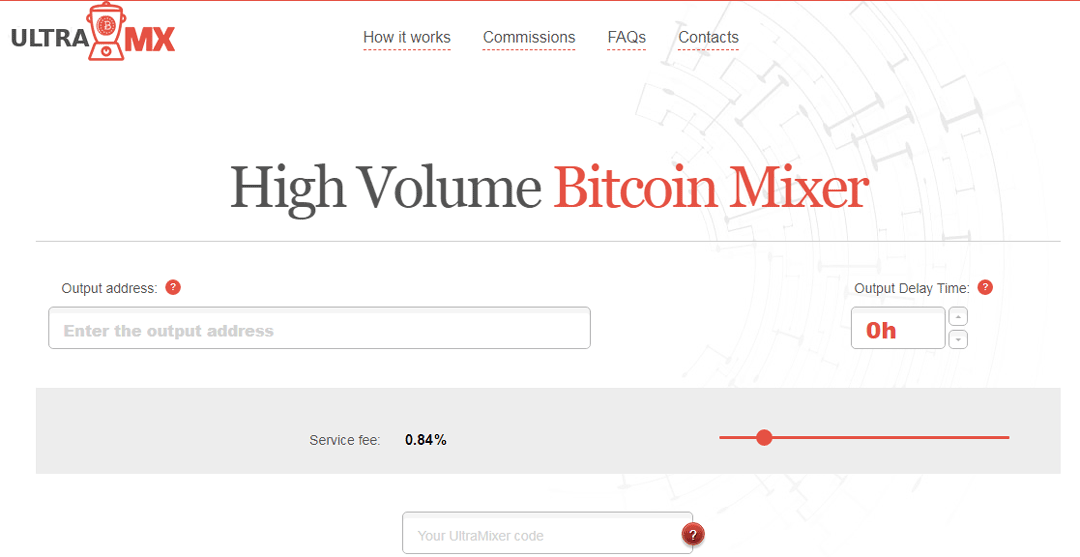 You see the top-bar. That has links to the FAQ, fee (commissions), an article on how the mixer works and a contact link.

Below that, there’s the address box. You simply enter the output address here. The “continue mixing” button is well-placed and easily recognizable, isn’t it?

So in a nutshell, you or anyone else can use UltraMixer even if you’ve never used, seen or even heard of a Bitcoin mixer prior to this.

How many output addresses does UltraMixer allow?

This is one of the less impressive aspects on this UltraMixer review.

The mixer only allows 1 output address. If it allowed more addresses, you could break your output into multiple parts which increases anonymity.

On the flip side, you have to pay less fee as there’s just one output address. Also, it’s a bit simpler than using multiple addresses.

If you’re new, you may not know what time-delays are.

Time delay is the amount  of delay between your deposit and the mixer’s output. Sending funds to a mixer and instantly getting an output is a bit risky, isn’t it?

Fortunately, UltraMixer does allow custom time-delays. You can set the amount of time you wish to wait before the mixer sends you your clean funds.

What I liked here is that the mixer offered me full control. I don’t have to select from a set of pre-specified delays. Rather, I can manually enter any number of hours I wish the delay  to be for!

Pro tip: This delay doesn’t affect your fee and hence you shouldn’t shy away from using an extended delay. The longer this delay is, the more anonymous your mix will be.

How much fee does UltraMixer charge?

It’s obviously one of the most important aspects on this UltraMixer review, isn’t it?

Now, I personally love the fact that UltraMixer gives us the choice of manually setting a fee!  This obviously isn’t unique and many mixers do offer similar control. However, the fact that it’s available with UltraMixer doesn’t make it any less important.

The fee can be set using a slider. The lowest possible fee is 0.5% while the highest fee is 3%. You can choose the fee to be anything in-between this bracket.

Do note that this fee is used on UltraMixer as a chain-selector. Meaning, the higher your fee, the more anonymous it is. This is because higher fee = a longer transaction chain on UltraMixer.

Does UltraMixer provide a letter of guarantee?

Again, if you’re new let me explain what this is and why it’s important?

The Letter of Guarantee is a PGP-signed letter from UltraMixer. It’s provided on the same page where you’re shown the deposit address for your unclean funds. 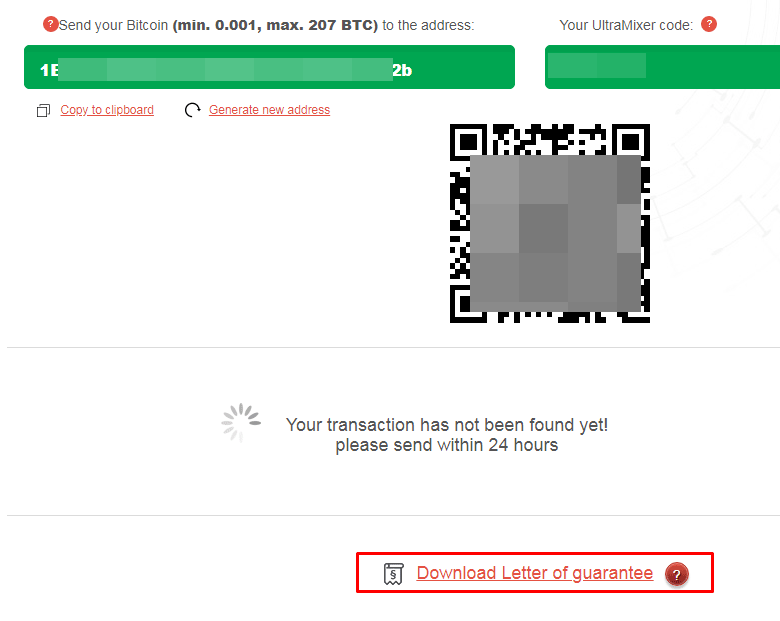 You get the LoG as a text file. Because it’s PGP-signed, it can be used to prove that the address you sent the funds to is actually owned by UltraMixer.

Hence, if you can prove your deposit (which you obviously can using any Blockchain ledger), you can prove that UltraMixer did actually get the funds.

This ensures that the mixer can’t deny getting your coins and hence  can’t refuse your payout.

In this (Bitcoin Mixing) industry, “trust” is the most valuable currency. If the mixer refuses to pay, you can post the LoG on various forums which would ruin their reputation and ultimately kill the company.

Does UltraMixer provide a mixing code?

What on earth is a “mixing code”? Why should you even care?

So, the mixing code also is displayed on the same page where the deposit address, and the LoG is displayed (check the screenshot above).

This makes sure that you don’t receive your own funds back on future uses of the mixer.

In other words, as soon as you deposit your funds, the mixer tags it with this mixing code. This code is completely random and hence can’t be linked to you in any way.

However, when you use the mixer a second time, you can enter this code. It tells the mixer that you’re the same person who sent a certain transaction at an earlier time.

The mixer then excludes your old transaction from its coin pool for your output. So whatever funds you get as your output are certainly not your own coins sent at an earlier time.

By logs, I mean anything that can be used to identify your coins or you personally. Fortunately, no, UltraMixer doesn’t store any such logs.

Because there’s no registration, there’s no data that must be retained either. The only thing they retain forever is the mixing code which is completely anonymous as well.

Any other logs such as output addresses or the deposit address generated for you is deleted permanently after the output is processed.

What is the minimum/maximum mix possible?

Can you mix very small amounts? Maybe you’re a millionaire and would like very high mixes?

Well, the smallest possible mix on UltraMixer is 0.001BTC. This is the standard minimum limit in the industry and is very affordable, isn’t it?

Do note that smaller mixes are not refunded. You also can’t send funds to a deposit address twice to add more funds to your initial deposit.

The maximum mixing limit too is equally impressive. As of today, it can mix coins up to 207 Bitcoins. That’s a massive number when converted to USD, isn’t it?

Do note that the maximum limit depends on the  mixer’s coin pool at any given time. By the time you read this UltraMixer review, this number is likely to change. However, on average, it should be able to process 200BTC+ mixes.

This UltraMixer review can’t be complete if I skip its “problems”, right?

Now, in my opinion, multiple output addresses is a very desirable feature which could be added. I’ve even seen Bitcoin mixers offer multiple deposit addresses for the unclean coins.

That would also bring in fund-distribution which is another feature that I’d love to see with the mixer.

Is UltraMixer the best Bitcoin mixer in the industry? Not exactly. Is it a mixer that I’d recommend and use for my own needs? Absolutely.

It’s 100% anonymous and lets me mix my coins without any personal information. It also is ultra-cheap with its lowest possible fee set at 0.3%. The fact that it lets me set the fee between 0.3% and 5% is what makes things even sweeter.

Sure I’d love more output addresses, but one gets the job done as well. For establishing trust, it even allows mixing negligible amounts worth just 0.001BTC! You’ve got money? It allows mixes up to 200BTC! 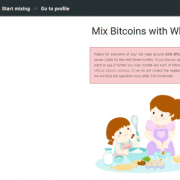 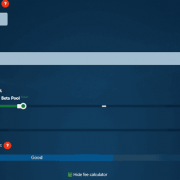 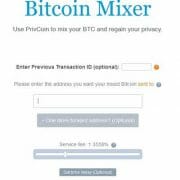